About me and my life with Apple products 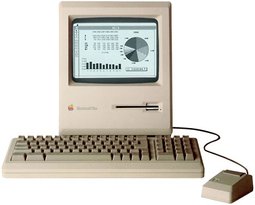 I’ve been a Mac user since 1988, providing Mac support since 1998, and a certified Apple Consultant since 2002. Every day I’m up to my eyeballs in Apple products — using them for my personal enjoyment and professional work, as well as teaching my clients and troubleshooting their systems.

How did I get here?

As a kid, I was fascinated by science, technology and computers. Turning a mainframe punch card over in my hands, I marveled at the digital world, but we were still a long way from the personal computer.

Being inclined towards typography and graphic design, I was immediately won over by a machine that offered such a friendly interface, with black characters on a white screen and WYSIWYG (what you see is what you get) printing in a range of fonts, which were even printable on the ImageWriter. This was a far cry from clunky PCs with their fluorescent green-on-black displays, and their boring single typeface cranked out on perforated continuous feed paper.

A computer for the rest of us

I knew right away that the Mac was my kind of computer: it was deeply human-centered and user-friendly. Apple was right to call it “the computer for the rest of us.”

I first had the opportunity to work with a Mac myself in 1988, doing desktop publishing on a friend’s Macintosh Plus and an early LaserWriter printer. When Apple introduced the more affordable Mac Classic in 1990, I purchased my very own. Since then, I’ve owned and been delighted by a Mac Classic II, Centris 660AV, Power Mac 8600, Power Mac G4, Power Mac G5, several iBook G3 and G4, many different versions of MacBook, MacBook Pro, MacBook Air and iMac.

When I got my first iPhone in 2007, it took my breath away. Even now, my iPhone is such a joy to use, and so full of magical capabilities, that it feels like technology that’s been brought back from the future.

Across entire line of Apple products, there have been so many quantum leaps in features, speed, price, and form factor in the first few decades — I can’t wait to see where Apple takes us next!
​

I love my job!

Having started out as a Mac-based designer for print and the Web in the ’80s and ’90s, being a Mac support provider enables me to blend several of my interests and skills.

A seasoned veteran in the world of Mac and iDevices, I’m passionate about mediating between people and technology, helping my clients get the most from their gear and conquer technophobia in general. There’s nothing like seeing a person’s eyes light up when they say, “I didn’t know I could do that!”
• • •

I’m also a passionate photographer; selections of my fine art photography
are available for viewing and purchase at www.ronaldgehrmann.com